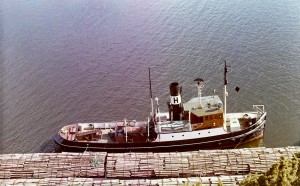 After we had gotten a few pictures from a previous crew member from Sweden in June, recently an ex colleague sent also pictures. Ronnie Svensson, who from 1966 to 1976 was Chief Engineer, first on Holmen III and later on Holmvik, had found the tug through our site. He was impressed with the condition of the Furie and sent forty photographs from the period when he was on board. Very valuable for our archive. It’s not just pictures where you can see how at that time timber rafts were towed but also how the engine room and boiler room looked. There is also a photo of Ronnie’s wife who worked on board as cook.