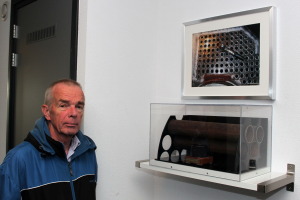 Mr. Andriessen with his creation.

The residents of the apartment building ‘Furie’ at the Santplaet in Maassluis, have previously sponsored two fire tubes and so helped to fund the replacement of all the tubes from the boiler to the Furie. Afterwards, we were asked if we had another piece of old tube and whether that could be used to create a work of art from it. No problem. Recently, we were called by Mr H. Andriessen who asked if we wanted to see the result created by him. The artwork consists of three pieces of tube and a picture hanging in the building across from the elevators. Where an old tube can be put to good use.
We also did some sailing. On November 14 we made a trip on the river with a group from The Hague and on Saturday, November 15th we had the annual arrival of Saint Nicolas. Despite the rain it was quite busy along the quayside. Many children with their parents saw the steamship Spain with Saint Nicolas and his entourage enter the port. The fuel was this time sponsored by Reinplus Van Woerden Bunker BV Argos. Later in the day there was the traditional sponsor trip to the port of Rotterdam. Enjoyable but wet.