Medal of Honor of Maassluis 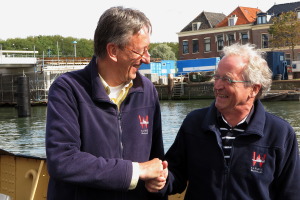 Henk and Ton after the official fairwell from Henk. Photo: Jan Steehouwer.

Henk de Haas , the man who at the time brought the Furie to Maassluis and founded the Hollands Glorie Foundation, considered almost 37 years of chairmanship enough and late last year he announced he wanted to resign. The board of the society together with the Advisory Board were tasked to find a successor and found him in Ton Raemakers . In late July Henk has passed the baton to Ton. On October 5th, we officially said goodbye to Henk, of course aboard the Furie. Henk was accompanied by his wife, children and grandchildren. It was quite a surprise for our former chairman that Koos Karssen, Mayor of the Municipality of Maassluis, awarded him with the city’s Medal of Honor. After the official part we made a sailing trip. Upon return to Maassluis, Henk was addressed by his successor who appointed him honorary chairman of the foundation.
In the recent period some more sailing was done. First, on Saturday September 6th for Alphatron in Rotterdam. As the World Harbour Days were held in that same weekend the Erasmus Bridge in Rotterdam only opened morning and evening at 7 o’clock. So it was decided to depart Friday afternoon, otherwise the black choir had to make a very long day. All had a great day and satisfied customers.
On Thursday, September 25th, the exhibition in Museum Maassluis : “35 years Furieade ” was officially opened by the mayor. An exhibition where various items from our archive can be seen.
The 35th Furieade on 3 and 4 October, was also quite a happening as it was a joint event with the closing ceremony of 400 years Maassluis. A spectacular opening with a leading role for the Furie on Friday , followed by a lantern parade with 5,000 participants , fireworks on the river and a performance by Ali -B. On Saturday it was beautiful warm weather, which resulted in many visitors and a cozy atmosphere.