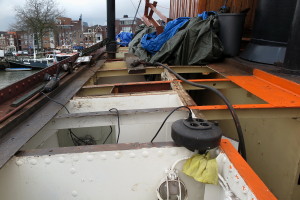 Before the Furie was towed to Shipyard De Haas Maassluis early January our volunteers had already done a lot of work. The telegraph, compass housing and bridge bullwark were removed and where necessary, the paneling of the interior of the ship. On the shipyard the lifeboats and davits were lifted off.
The carpenters of Ship Timmerwerf Hope could then begin removing the deck on the port side. It turned out that only a small portion of the underlying rafters needed replacement. And when that is done the now delivered and preserved wood will be fitted in the old-fashioned way with tar and hemp.
The works on the bridge deck are on schedule and we hope, as previously written, to return in May to our familiar berth at the Stadhuiskade.
Earlier this month, the boiler did undergo its biennial inspection by Lloyd’s. No problems and fully approved, we pay tribute to our black choir.