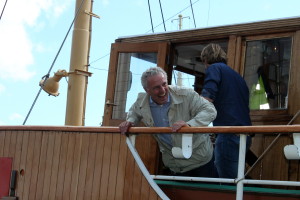 Huub Stapel on board the Furie Photo: Jan Steehouwer

In the TV program Max Monumentaal, an initiative of the BankGiro Lottery, Huub Stapel shows how buildings are being restored which from a cultural point of view deserve to be preserved.
O n July 1, Huub Stapel presented the key of the restored Delflandhuis in Maassluis to the Foundation Hendrick de Keyser. Since the handover took place at the Stadhuiskade, the Furie also came into the picture. The closure of the program, after a city tour, was recorded in the wheelhouse of the tug. All in all great advertising, thanks to Max Monumentaal. The series is being recorded by Endemol and will be broadcasted by Broadcast Company Max this autumn.

Works in progress
In the recent period there has been done a lot of work. The stand at SB – side of the bridge deck back was removed, conserved and placed back straightened and then there was the necessary regular maintenance. Currently we are working on replacing the glass slats of the windows of the wheelhouse, new furniture is being built in the PS forward cabin and the black choir is busy installing the piston driven steam generator.